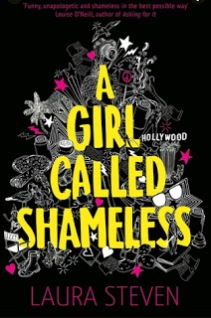 Izzy and her best friend Ajita are as hilarious as ever, using comedy to fight back against whatever the world throws at them, but Izzy is still reeling from her slut-shaming ordeal, feeling angry beyond belief and wondering – can they really make a change?

The Exact Opposite of Okay was one of my favourite books of last year, I absolutely loved it.  When I found out about a sequel, I was kind of surprised since I thought The Exact Opposite of Okay ended really well and didn’t seem to need a sequel but then I started to get more excited for the sequel because I wanted to read more about Izzy’s story.
I did like A Girl Called Shameless but I was disappointed by it.  Even though some big things happen in this book (like standing up and trying to end things like revenge porn and slut shaming), I felt that there wasn’t enough things happening to warrant another book and I feel that most of A Girl Called Shameless could’ve been told in an epilogue at the end of The Exact Opposite of Okay.
Like I said, I did like this book and I enjoyed reading Izzy’s witty banter but I thought her personality was slightly dulled compared to the first book.  I also felt like we didn’t see much of the vulnerable side to Izzy that had progressed so much in The Exact Opposite of Okay.
I did like the overall message just like the first book and I loved how Izzy fought to get stuff done but at the same time I felt that I connected with the important topic more in the first book because it was so personal for Izzy that it made me feel more emotionally invested in the story than I was in A Girl Called Shameless.
Overall I enjoyed A Girl Called Shameless but not as much as the first book.  I still love Izzy and think she’s a strong character.  And even though I didn’t feel as emotionally invested in this book as I did the first, I still like the overall message and think it’s an important one.