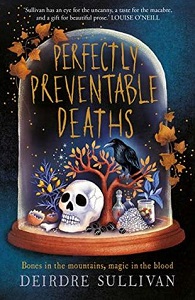 Everyone in Ballyfran has a secret, and that is what binds them together…

Fifteen-year-old twins Madeline and Catlin move to a new life in Ballyfran, a strange isolated town, a place where, for the last sixty years, teenage girls have gone missing in the surrounding mountains.

As distance grows between the twins – as Catlin falls in love, and Madeline begins to understand her own nascent witchcraft – Madeline discovers that Ballyfrann is a place full of predators. Not only foxes, owls and crows, but also supernatural beings who for many generations have congregated here to escape persecution. When Catlin falls into the gravest danger of all, Madeline must ask herself who she really is, and who she wants to be – or rather, who she might have to become to save her sister.

My Review:
I didn’t know what to expect from this book but the cover and blurb of it had me excited and hoping for a great spooky read. I liked the overall premise of this book, the protagonist and her family moving to a new place that has many secrets. The book did have a creepy atmosphere to it especially since the family move into a castle that has hidden rooms and I liked the witchcraft aspect of the book.

What I didn’t like was the characters especially the protagonist Maddy. I found her to be very unlikable and in the beginning I thought maybe her personality would grow more but it didn’t. Maddy compares herself to her twin sister Catlin all the time and she’s always internally berating herself for not being as good as her and it annoyed me how often she did this, in almost every second paragraph she does this. One time Catlin paints her nails a bright colour and Maddy compares them to her dull grey nail polish, then the next day Maddy points out how her sisters nails are still perfect and hers are all chipped. I don’t really understand why those many comparisons were made.

Catlin, Maddy’s twin, was another character I disliked. I didn’t dislike her because she annoyed me, I disliked her because she had no personality traits other than obsessing over a boy. Her character is introduced by making a comment on there being ‘hot boys’ at their new town and the rest of the book is her being in a messed up relationship and having no other thoughts and feelings if it wasn’t on her relationship.

And that is another thing I disliked about the book. The relationship between Catlin and an older boy is essentially the main plot of this book. The people in the town of this book are very big on being cryptic and having secrets and I found it strange that all the adults in this town were so secretive that they couldn’t even talk to Catlin, who is a child, about what was really going on. I can’t go into much details about that because of spoilers. I thought the ending was just kind of thrown together and nothing was really explained.

Overall I liked the setting and creepy atmosphere of in Perfectly Preventable Deaths but I really disliked the characters and the ending. I will also say that there are some scenes that detailed animal mutilation that I felt were just there to make things seem more dark and intense. Ultimately I was very disappointed in this book.