Top Ten Tuesday is a weekly feature hosted by That Artsy Reader Girl. This week’s topic is: Ten Most Recent Reads. Since I’ve already talked about my most recent reads in my April wrap up which I posted yesterday I thought I’d change this week’s topic to the most recent additions to my tbr.

The Faceless Mage (Legends of Abreia #1) by Kenley Davidson – This is the first book in a fantasy romance series and I keep seeing it on Amazon so I thought I might as well put it on my tbr.

All Systems Red (The Murderbot Diaries #1) by Martha Wells – Again I’ve heard nothing but good things about this series and I can’t wait to read about Murderbot.

When the Tiger Came Down the Mountain (The Singing Hills Cycle #2) by Nghi Vo – I read the first book in this series last month and was intrigued to continue with this series even though they are standalone stories.

A Dowry of Blood by S.T. Gibson – This book is a reimagining of Dracula with the focus on his brides and it sounds like it would be an interesting read.

A Memory Called Empire (Teixcalaan #1) by Arkady Martine – This is a sci-fi/ fantasy space opera book and I’ve seen so many good reviews of it. I don’t really know too much of what it’s about but I’m excited for it anyway.

What books have you recently added to your tbr? 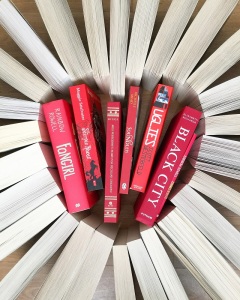